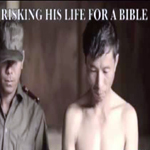 RISKING HIS LIFE FOR A BIBLE!

HE COULD STAND THE TORTURE, BUT HE COULDN’T STAND A DAY WITHOUT HIS BIBLE.

He was on the career path to success. He had a good job as an assistant to the Communist Party district leader.

But then he met the Christians and was intrigued by their enthusiastic worship. Later, he met Jesus himself.

Bounchan was so thrilled about his newfound faith that he began to share it freely. But his new allegiance was not welcomed in communist Laos, where loyalty to the party is all-important and ancestors are worshiped as gods.

Bounchan lost his job, his place in the community and, finally, his freedom.

In 1999, he was sentenced to 15 years in prison for telling others about God after authorities had forbidden his evangelical work. While in prison, he was tortured, beaten, starved, locked in stocks and condemned to solitary confinement for weeks.

But for Bounchan, those weren’t the worst punishments. He was cut off from family, friends and anyone who could encourage him when he felt his lowest. Most of all, he craved God’s living Word, the Scriptures that inspired his passion for Jesus. How could he survive prison without it? This video will open your eyes to the reality of persecution against Christians while moving you to pray for our persecuted brothers and sisters.