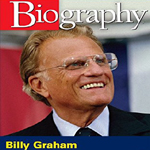 Born November 7, 1918—only four days before the armistice ending World War I and exactly one year after the Communist Revolution in Russia—Billy Graham was raised on a dairy farm outside Charlotte, North Carolina. Growing up during the Depression, he learned the value of hard work, but he also found time to become an avid reader, which was a lifelong pursuit. 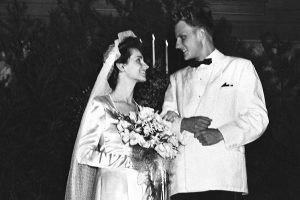 Although he was raised in a devout, churchgoing family, Billy Graham did not make a personal commitment to Christ until just before his 16th birthday. That decision, on November 1, 1934, would change the course of his life. Several years later, while studying at Florida Bible Institute (now Trinity College) in Temple Terrace, Florida, he sensed a strong call from God to become a preacher of the Gospel, and after a period of struggle, committed himself to that call. He continued his education at Wheaton College near Chicago, majoring in anthropology. He preached as often as possible and even served briefly as pastor of the United Gospel Tabernacle while maintaining a full class load. While at Wheaton, he met his future wife, Ruth McCue Bell, the daughter of medical missionaries in China; they were married shortly after graduation on August 13, 1943.

After a brief stint as pastor of The Village Church of Western Springs in Western Springs, Illinois, Graham became the first full-time staff member of Youth for Christ, a nondenominational evangelistic organization focused on youth and military personnel. He preached in public rallies throughout the United States and in Europe in the immediate postwar era.

A 1949 citywide preaching Crusade in Los Angeles unexpectedly vaulted Billy Graham into the public eye. Originally scheduled for three weeks, the meeting extended to eight weeks. Night after night, crowds spilled out of a huge tent that became known as the Canvas Cathedral. Major newspapers and magazines spotlighted the story, and almost overnight Billy Graham became a household name. A subsequent 12-week Crusade in London (1954) brought him international recognition, and a 16-week Crusade in New York (1957) confirmed his position as one of history’s leading Christian evangelists.

For decades, Billy Graham held numerous preaching Crusades in stadiums and sports arenas across the United States and Canada, as well as in India, Africa, Australia, South America, the Middle East, Europe, and other parts of the world. A 1977 trip to communist-led Hungary opened a new phase in his ministry, eventually enabling him to conduct preaching Crusades in virtually every country of the former Eastern Bloc (including the Soviet Union), as well as China and North Korea.

He is known as a pioneer in the use of new technologies to preach the Gospel, from radio and television to films and the internet. Beginning in 1989, a series of Crusades via satellite extended his preaching to live audiences in more than 185 countries and territories. From remote tribal villages to major world capitals, Billy Graham always sought to fulfill Christ’s final command to His disciples: “He said to them, ‘Go into all the world and preach the good news to all creation’” (Mark 16:15). His last official Crusade was held in New York City in June 2005. Subsequently, he and his son Franklin traveled to New Orleans in March 2006, where Billy Graham shared a message of hope with tens of thousands who were recovering from Hurricane Katrina. He spoke at the Franklin Graham Metro Maryland Festival in Baltimore in July 2006, and at the dedication of the Billy Graham Library (in May 2007) at the age of 88. Mr. Graham’s message of hope in Christ was a major focus of the North American outreach, My Hope with Billy Graham, in November 2013.

Mr. Graham wrote more than 30 books, many of which stayed on the best-seller lists for months. Peace with God, his first major book (1953), has been translated into 38 languages, and was re-released in 2017 as his “inaugural book.” In his updated autobiography, Just As I Am (2007), he reflected on how his life and ministry call as an evangelist had been shaped by his faith in Christ. Billy Graham’s most recent book, Where I Am: Heaven, Eternity and Our Life Beyond, was released in 2015. Mr. Graham co-founded Christianity Today magazine with Dr. L. Nelson Bell. The first issue was mailed October 15, 1956. In 1960, he founded Decision magazine. Both periodicals remain in publication today. 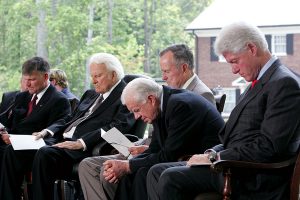 His counsel was sought by presidents, celebrities, and others of influence, yet he always emphasized that the vast majority of his time was spent with ordinary people. He appeared on the Gallup Poll’s list of the “Ten Most Admired Men in the World” 61 times—more than any other personality in the poll’s history. Recognitions included the Presidential Medal of Freedom, the Congressional Gold Medal (shared with his wife), the Templeton Prize for Progress in Religion, the George Washington Carver Memorial Institute Gold Award, the International Brotherhood Award of the National Conference of Christians and Jews, the Franciscan International Award, and more than two dozen honorary degrees. In 2001, Her Majesty Queen Elizabeth II made him an honorary Knight Commander of the British Empire. Billy Graham was named North Carolina’s “Favorite Son” by unanimous vote of the state General Assembly on April 10, 2013.

“MY ONE PURPOSE IN LIFE IS TO HELP PEOPLE FIND A PERSONAL RELATIONSHIP WITH GOD, WHICH I BELIEVE, COMES THROUGH KNOWING CHRIST.”
— BILLY GRAHAM

Accomplishments are not the only measure of a person’s life, however, and those who knew Billy Graham best will always remember his compassion, humor, love for family and friends, integrity, humility, and willingness to learn from others, from his experiences, even from his mistakes. He was preceded in death by his beloved wife, Ruth, in June 2007, and the couple leaves three daughters, two sons, 19 grandchildren, 44 great-grandchildren and 6 great-great-grandchildren.

Interviewer Sir David Frost once asked Billy Graham how he hoped to be remembered. He thought a moment and then replied: “As a person who had integrity, and who was faithful to his calling, and who loved God with all his heart, mind, and soul.” 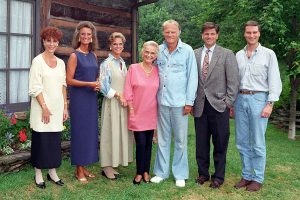 1947: Calling Youth to Christ
1952: Author of syndicated newspaper column “My Answer,” carried by newspapers across the country with a combined circulation of 5 million readers
1953: I Saw Your Sons at War
1953: Peace with God — more than 2 million copies sold in 38 languages; revised and expanded in 1984
1955: Freedom from the Seven Deadly Sins
1955: The Secret of Happiness
1958: Billy Graham Talks to Teenagers
1960: My Answer
1960: Billy Graham Answers Your Questions
1965: World Aflame — The New York Times and Time magazine best-seller lists for several weeks
1969: The Challenge
1971: The Jesus Generation
1975: Angels: God’s Secret Agents — Publishers Weekly and The New York Times best-seller lists (21 weeks each); Evangelical Christian Publishers Association (ECPA) Platinum Book Award
1977: How to Be Born Again
1978: The Holy Spirit — ECPA Gold Book Award
1981: Till Armageddon — ECPA Platinum Book Award
1983: Approaching Hoofbeats: The Four Horsemen of the Apocalypse — The New York Times best-seller list; ECPA Gold Book Award
1984: A Biblical Standard for Evangelists
1984: Peace with God (reprint edition)
1986: Unto the Hills
1987: Facing Death and the Life After — Christian Booksellers Association best-seller list (21 weeks)
1988: Answers to Life’s Problems
1991: Hope for the Troubled Heart
1992: Storm Warning
1997: Just As I Am
2002: Hope for Each Day
2003: The Key to Personal Peace
2005: Living in God’s Love: The New York Crusade (reprinted as paperback in 2006 as The Last Crusade)
2006: The Journey: How to Live by Faith in an Uncertain World
2007: Updated and expanded Just As I Am
2010: Storm Warning (Revised)
2011: Nearing Home: Life, Death and Finishing Well
2012: The Heaven Answer Book
2013: The Reason for My Hope — Salvation
2015: God’s Good News Bible Storybook (for children)
2015: Where I Am: Heaven, Eternity and Our Life Beyond 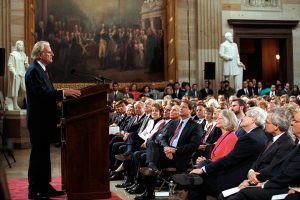 (The following is a partial list of the numerous awards Billy Graham received):