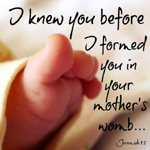 You have a Destiny with Christ 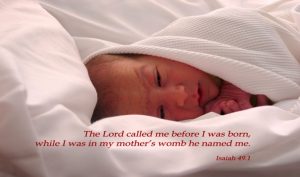 …God, who separated me from my mother’s womb and called me through His grace,

Beloved, you are not an accident with no destiny. God has called you from your mother’s womb. You have a special calling and a destiny in Christ, and it is all by His grace!

There are Christians who are called by God to be doctors. But I believe that among them are those separated from their mothers’ wombs for the healing ministry. They are passionate about seeking cures to alleviate the sufferings of humanity.

Likewise, I think that there are Christians who are called by God to be teachers in secular schools. But among them are those separated from their mothers’ wombs to be Bible teachers. What gives them tremendous fulfillment is seeing lives saved and transformed under their teaching.

What about those famous magicians you see performing tricks on television? They have a love for the mystical and supernatural. If they were to become Christians, they might just become prophets with ministries marked by the miraculous!

The apostle Paul knew that he was called from his mother’s womb. He had a misguided passion for God though, as he was persecuting the church, until he had his encounter with Jesus. (Acts 8:3, 9:1–6)

If Paul, a terrorist to the early church, could be touched by Christ to become an apostle of grace, what about today’s terrorists who blow up people in the name of their god? For all you know, if they receive Christ, they might just become trailblazers in the kingdom of God!

Now, don’t think that your calling has to do with your qualifications, abilities, achievements or even your walk with God. You were called from your mother’s womb by His grace. As a fetus in your mother’s womb, there was not much you could do—good or bad. That is why your calling is all by His grace. And since He has given you a calling, ask the Holy Spirit to help you discern the desires that He has placed in your heart, the passions that drive you in life, and fulfill your calling and destiny in Christ!

By the grace of God, you have a special calling and destiny in Christ!