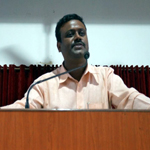 Mr. Sandeep Giri preached from 1 Chronicles 4:9,10. His theme was based on the model prayer of Jabez.

His prayer had 4 salient features which we need to remember too.

The Bible says, God granted his request. Is our prayer life on track today! Let us retrospect.