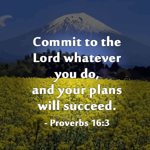 Only the Lord gives Success

The Lord was with Joseph, and he was a successful man…

You may have no qualification, position or money—nothing in the natural. But when the Lord is with you, you will end up with everything because He will cause you to be successful.

Joseph had nothing when his Egyptian master Potiphar bought him from the slave market. Yet, even then, it was said of him, “The Lord was with Joseph, and he was a successful man.”

Joseph the slave a successful man? He was a nobody with nothing, not even a shirt on his back, not a dime to his name, no family members with him and no friends to turn to. All he had was the presence of the Lord. But it was precisely because of this that he was successful wherever he was. He eventually became the most powerful man in Egypt, second only to Pharaoh, who set him over all the land of Egypt. Joseph was given power, authority and riches (see Genesis 41:40–44), all because the Lord was with him.

A junior college student once experienced good success in his examination results for the same reason. The first to admit that he was just an average student, he obtained his first ever straight As for all his subjects when he sat for the Singapore-Cambridge General Certificate of Education (Advanced Level) Examination simply believing that he would be successful because the Lord was with him!

There was a young girl, who was a fresh university graduate, believed that because the Lord was with her, she would be successful in the workforce. Even though she had no work experience and was faced with a gloomy job market, she succeeded in getting her first job in a short period of time and which gave her a salary beyond her expectations. Then, in spite of a directive from the parent company to freeze the wages of all employees, she received a pay increment as well as a company scholarship for further education!

Beloved, it does not matter if you are a nobody with nothing in the natural. When the Lord is with you, you will end up with everything because He will empower you to succeed and live the abundant life. Indeed, you will end up enjoying His favor, goodness and grace!

When the Lord is with you, you will end up with everything because He will cause you to be successful.