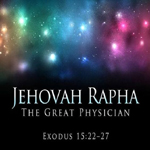 On Health and Healing

God Wants You Healed And Whole

Surely He has borne our griefs (sicknesses, weaknesses, and distresses) and carried our sorrows and pains [of punishment], yet we [ignorantly] considered Him stricken, smitten, and afflicted by God [as if with leprosy]. But He was wounded for our transgressions, He was bruised for our guilt and iniquities; the chastisement [needful to obtain] peace and well-being for us was upon Him, and with the stripes [that wounded] Him we are healed and made whole.
—    Isaiah 53:4–5 (AMP)

… who Himself bore our sins in His own body on the tree, that we, having died to sins, might live for righteousness—by whose stripes you were healed.
—    1 Peter 2:24

He who did not spare His own Son, but delivered Him up for us all, how shall He not with Him also freely give us all things?
—    Romans 8:32

Suddenly, a man with leprosy approached Him and knelt before Him. “Lord,” the man said, “if You are willing, You can heal me and make me clean.” Jesus reached out and touched him. “I am willing,” He said. “Be healed!” And instantly the leprosy disappeared.
—    Matthew 8:2–3 (NLT)

“Lord, help!” they cried in their trouble, and He saved them from their distress. He sent out His word and healed them, snatching them from the door of death.
—    Psalm 107:19–20 (NLT)

For He will rescue you from every trap and protect you from deadly disease.
—    Psalm 91:3 (NLT)

He also brought them out with silver and gold, and there was none feeble among His tribes.
—    Psalm 105:37

Beloved, I pray that in all respects you may prosper and be in good health, just as your soul prospers.
—    3 John 1:2 (NASB)

Do not be afraid of the terrors of the night, nor the arrow that flies in the day. Do not dread the disease that stalks in darkness, nor the disaster that strikes at midday. Though a thousand fall at your side, though ten thousand are dying around you, these evils will not touch you.
—    Psalm 91:5–7 (NLT)

Bless the Lord, O my soul, and forget not all His benefits: Who forgives all your iniquities, Who heals all your diseases.
—    Psalm 103:2–3

My son, give attention to my words; incline your ear to my sayings. Do not let them depart from your eyes; keep them in the midst of your heart; for they [are] life to those who find them, and health to all their flesh.
—    Proverbs 4:20-22

Everyone Who Came To Jesus Was Healed

And Jesus went about all Galilee, teaching in their synagogues, preaching the gospel of the kingdom, and healing all kinds of sickness and all kinds of disease among the people.
—    Matthew 4:23

News about Him spread as far as Syria, and people soon began bringing to Him all who were sick. And whatever their sickness or disease, or if they were demon-possessed or epileptic or paralyzed—He healed them all.
—    Matthew 4:24 (NLT)

When Jesus had entered Capernaum, a centurion came to him, asking for help.  “Lord,” he said, “my servant lies at home paralyzed, suffering terribly.”  Jesus said to him, “I will go and heal him.”
—    Matthew 8: 5–7 (NIV)

When evening had come, they brought to Him many who were demon-possessed. And He cast out the spirits with a word, and healed all who were sick, that it might be fulfilled which was spoken by Isaiah the prophet, saying: “He Himself took our infirmities and bore [our] sicknesses.”
—    Matthew 8:16–17

Then great multitudes came to Him, having with them [the] lame, blind, mute, maimed, and many others; and they laid them down at Jesus’ feet, and He healed them.
—    Matthew 15:30

Jesus had compassion on them and touched their eyes. Immediately they received their sight and followed Him.
—    Matthew 20:34 (NIV)

And He entered the synagogue again, and a man was there who had a withered hand. So they watched Him closely, whether He would heal him on the Sabbath, so that they might accuse Him. And He said to the man who had the withered hand, “Step forward.” Then He said to them, “Is it lawful on the Sabbath to do good or to do evil, to save life or to kill?” But they kept silent. And when He had looked around at them with anger, being grieved by the hardness of their hearts, He said to the man, “Stretch out your hand.” And he stretched [it] out, and his hand was restored as whole as the other.
—    Mark 3:1–5

A woman in the crowd had suffered for twelve years with constant bleeding. She had suffered a great deal from many doctors, and over the years she had spent everything she had to pay them, but she had gotten no better. In fact, she had gotten worse. She had heard about Jesus, so she came up behind Him through the crowd and touched His robe. For she thought to herself, “If I can just touch His robe, I will be healed.” Immediately the bleeding stopped, and she could feel in her body that she had been healed of her terrible condition.
—    Mark 5:25–29 (NLT)

Jesus stopped and said, “Call him.” So they called to the blind man, “Cheer up! On your feet! He’s calling you.” Throwing his cloak aside, he jumped to his feet and came to Jesus. “What do you want Me to do for you?” Jesus asked him. The blind man said, “Rabbi, I want to see.” “Go,” said Jesus, “your faith has healed you.” Immediately he received his sight and followed Jesus along the road.
—    Mark 10:49–52 (NIV)

When the sun was setting, all those who had any that were sick with various diseases brought them to Him; and He laid His hands on every one of them and healed them.
—    Luke 4:40

And the whole multitude sought to touch Him, for power went out from Him and healed [them] all.
—    Luke 6:19

A funeral procession was coming out as He approached the village gate. The young man who had died was a widow’s only son, and a large crowd from the village was with her. When the Lord saw her, His heart overflowed with compassion. “Don’t cry!” He said. Then He walked over to the coffin and touched it, and the bearers stopped. “Young man,” He said, “I tell you, get up.” Then the dead boy sat up and began to talk! And Jesus gave him back to his mother.
—    Luke 7:12–15 (NLT)

And a woman was there who had been crippled by a spirit for eighteen years. She was bent over and could not straighten up at all.  When Jesus saw her, He called her forward and said to her, “Woman, you are set free from your infirmity.” Then He put His hands on her, and immediately she straightened up and praised God.
—    Luke 13:11–13 (NIV)

One of the men lying there had been sick for thirty-eight years.  When Jesus saw him and knew he had been ill for a long time, He asked him, “Would you like to get well?” “I can’t, sir,” the sick man said, “for I have no one to put me into the pool when the water bubbles up. Someone else always gets there ahead of me.” Jesus told him, “Stand up, pick up your mat, and walk!” Instantly, the man was healed! He rolled up his sleeping mat and began walking!
—    John 5:5–9 (NLT)

“…how God anointed Jesus of Nazareth with the Holy Spirit and with power, who went about doing good and healing all who were oppressed by the devil, for God was with Him.”
—    Acts 10:38

Prayer For Healing And Wholeness

“Lord Jesus, I thank You that You love me and that You are both able and willing to heal me. At the cross, You took all my sicknesses and pains in Your own body, and by Your stripes, I am healed! Your body was scourged and broken so that mine can be made whole. I receive all that You have done for me and I rest in Your finished work. There is nothing more for me to do. As I wait on You for the complete manifestation of my healing, I choose to focus on and give praise for Your great love for me. Amen!”