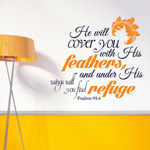 His Angels are Watching over you

No evil shall befall you, nor shall any plague come near your dwelling; for He shall give His angels charge over you, to keep you in all your ways.

Don’t you just sense your Father’s love in these words? Like a mother hen that spreads her wings over her chicks to protect them, God will “cover you with His feathers, and under His wings you shall take refuge”. (Psalm 91:4) So don’t be fearful of accidents, terrorist attacks, diseases or tsunamis because your heavenly Father loves you and watches over you.

Let me share with you a true story. A Christian was flying his plane when he realized that it was low on fuel. He contacted the air traffic controller and asked for assistance to land. But he was told that he could not land because there was a heavy fog. Then, the radio went silent and the plane entered the fog.

He was flying blindly when he suddenly heard over his headphones, “Pull up! Pull up!” He pulled up just in time to avoid hitting the expressway! Then, the voice said, “Follow my instructions and I will help you land safely.”

He obeyed and landed perfectly. Thinking that it was the air traffic controller who had helped him, he immediately looked for him to thank him. But when he found him, the man said, “Listen, we lost contact with you when I told you that there was a heavy fog. None of us managed to speak to you after that.” The pilot realized then that God had sent an angel to lead him to safety.

Beloved, your heavenly Father is watching over you. That is why no evil will befall you, nor will any plague come near your dwelling. And He has a host of angels to keep you in all your ways!

Don’t be fearful because your heavenly Father and His angels are watching over you.