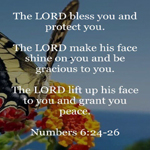 He will never turn back on you 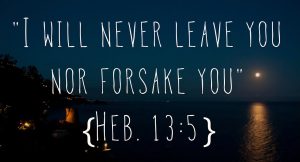 …He Himself has said, “I will never leave you nor forsake you.”

For six whole hours, the Son of God was suspended between heaven and earth. And at the height of His suffering on the cross, He cried out in the deep darkness, “My God, My God, why have You forsaken Me?” (Matthew 27:45–46).

For the first time, Jesus addressed His Father as “God.” The Father had forsaken the Son. As Judge of the universe, God had to turn His back on His Son, who was carrying the filth of the world’s sins, for His eyes are too pure to behold evil (see Habakkuk 1:13).

If the Father had not turned His back on His Son, He would have to turn His back on you today when you call out to Him in your hour of need. But because Jesus has taken your place, today, you take His place, and you have God’s face smiling on you always!

Right now, God’s face is smiling on you. His countenance is shining on you. I can stand before you and declare, “The Lord make His face shine upon you” (Numbers 6:25–26). And it is all because Jesus has paid the price for God to never leave you nor forsake you (see Hebrews 13:5).

As Judge, God turned His back on His Son. But as Father, He cried. His heart was broken because Christ was never more pleasing to Him than when He was on the cross. Christ’s suffering was a sweet-smelling aroma to the Father (see Ephesians 5:2).

Do you remember what Jesus said? “Therefore My Father loves Me, because I lay down My life that I may take it again” (John 10:17). If you are a parent, you love each one of your children equally. But when one of them does something special for you out of love, it touches your heart, and you just want to run to him and hug him.

That was what happened at the cross, except that the Father could not embrace His Son. Instead, He had to turn His back on His Son because our sins had to be punished in His Son’s body.

Beloved, when you cry out to the Father for help today, know that He hears you and will surely help you. Because of Jesus, He will never turn His back on you!

Jesus has paid the price for God to never leave you nor forsake you. He is with you always.