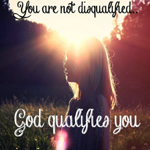 who [the Lord] redeems your life from destruction, who crowns you with lovingkindness and tender mercies,

Four women are mentioned in the genealogy of Jesus. (Matthew 1:1–16) Interestingly, they are not Sarah, Rebekah, Leah or Rachel, wives of the patriarchs of the Old Testament. Instead, they are Tamar, Rahab, Ruth and Bathsheba, women who had morally questionable backgrounds.

Tamar resorted to deception and prostitution to produce children through her father-in-law. Yet, it was from her line, the tribe of Judah, that the Messiah came. (Genesis 38) Rahab was a Gentile and a prostitute in Jericho, who became a believer in the God of Abraham, Isaac and Jacob. (Joshua 2:1–21) She also became the mother of Boaz, who married Ruth. (Ruth 4:13)

Ruth was morally upright. But as a Moabitess, she was a Gentile and therefore considered unclean. Yet, she became the grandmother of David (Ruth 4:13–17), whom the Jews regard as their greatest king. Bathsheba committed adultery with David. (2 Samuel 11:4) Later, she gave birth to King Solomon (2 Samuel 12:24), from whose royal line Jesus descended.

So what is God saying to us here?

God is also saying that He is a God of many chances. These women’s stories show us that even when our troubles are of our own making, they are neither final nor fatal. When we turn to Him, He will turn our situations around until we see His glory upon us!

Finally, God is saying that He is a God of supernatural positioning. Even when all our earthly connections are gone, the moment we turn to Him, He will find ways to turn our captivity into blessings.

My friend, don’t look at your natural circumstances and be discouraged. Trust the One “who redeems your life from destruction, who crowns you with lovingkindness and tender mercies”. Trust Him who qualifies the disqualified!

God’s grace is greater than our sins, so that even when the world disqualifies us, He can qualify us to receive His blessings!