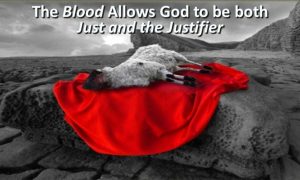 But to him who does not work but believes on Him who justifies the ungodly, his faith is accounted for righteousness,

Boldness is what God wants you to have when you come to Him. He does not want you to be afraid to come to Him, feeling unworthy because of your sins. He wants you to come boldly to Him, knowing that the death, burial and resurrection of His Son Jesus Christ has justified you and qualified you to boldly receive from Him.

This was the kind of boldness that the woman with the issue of blood had when she touched Jesus. (Mark 5:25–34) Now, by touching Jesus, she knew that she was breaking a Levitical law which states that anyone with a bodily discharge is unclean, and should not appear in public, let alone touch another person. (Leviticus 15)

But she refused to feel condemned by the law. She believed what she had heard about Jesus, and was confident that there would only be love and compassion, not condemnation, from Him. She believed that Jesus would justify her and qualify her to receive the miracle she needed. That was why she boldly pressed her way into the crowd to touch Jesus, who indeed said to her, “Daughter, your faith has made you well.” (Mark 5:34)

When you fail, don’t run away from God. Run boldly to Him, knowing that you are justified by the blood of Christ and not by your good behavior.

The devil may say to you, “How can you do that? Who do you think you are?” Don’t listen to him. Pick yourself up and thank God for the blood and the gift of no condemnation. (Romans 8:1) If God justifies the ungodly, how much more you, His beloved child!

You are justified by the blood of Christ and not by your good behavior.