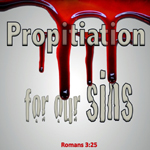 Focus on Christ and His Finished Work

And He Himself is the propitiation for our sins, and not for ours only but also for the whole world.

In the movie, Raiders Of The Lost Ark, the people who tried to look inside the ark were struck dead. What was inside the ark that brought judgment to those who looked into it?

God did not want to look at these tokens of rebellion. He wanted to be merciful to His people, so He instructed them to place the items in the ark and to cover the ark with its mercy seat, which is also the place where the blood of the animal sacrifices was sprinkled.

Once a year on the Day of Atonement, the high priest would enter the Holy of Holies to sprinkle on the mercy seat the blood of the animal that had been sacrificed. The two cherubim on the mercy seat stood as guardians of God’s righteousness and holiness.

Representing God’s eyes too, they looked at the blood on the mercy seat. As long as the blood was there, the entire nation of Israel was forgiven. God’s judgment passed over them and they were blessed for another year. (Leviticus 16)

Today, the blood sprinkled on the mercy seat is not the blood of bulls and goats, but the precious, eternal blood of the Son of God! (Hebrews 9:12) Jesus is our “mercy seat” for “He Himself is the propitiation for our sins, and not for ours only but also for the whole world”. The word “propitiation” in the original Greek text is the same word as “mercy seat”. (Romans 3:25, Hebrews 9:5)

Beloved, God does not see your sins and count them against you because He sees His Son’s blood.