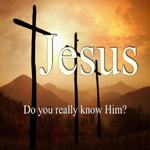 Do you know JESUS of the Bible!

“If you had known Me, you would have known My Father also; and from now on you know Him and have seen Him.”

Someone once told me that just because you ask God for something, it does not mean that He will give it to you. Quoting 1 John 5:14–15, he said that we first have to ask according to His will before He hears and gives us what we ask of Him.

Of course, we do not ask for things that are against God’s will or Word. But what is normally implied in the earlier statement is that we don’t always know what God’s will for us is—“what will be, will be”. But didn’t Jesus say, “He who has seen Me has seen the Father”? (John 14:9) This means that if you want to know what the Father’s will, mind, heart or attitude toward you and your family is, just look at Jesus in the Gospel stories.

So if your child is sick, is it God’s will to heal him? Well, look at Jesus and see how He ministered to children who were sick—the Syro-Phoenician’s daughter who was demon-possessed (Mark 7:24–30), Jairus’ daughter who was dead (Mark 5:22–24, 35–43), and the widow of Nain’s only son who had died and was about to be buried. (Luke 7:12–15) Jesus cast out the demon. He raised the dead. He healed them all!

Beloved, don’t say, “We can never know God’s will. Sometimes He heals, sometimes He doesn’t. He may bless us, but He may also take away our blessings.” The Jesus of the Bible never made anyone sick. He never made anyone poor. He made the little become much with 12 baskets full of leftovers. (Matthew 14:20) He gave a net-breaking, boat-sinking load of fish to fishermen. (Luke 5:6–7)

My friend, the Jesus of the Bible loves to heal, deliver, prosper and save people. This Jesus is the same yesterday, today, and forever. (Hebrews 13:8) And He says to you today, “If you had known Me, you would have known My Father also; and from now on you know Him and have seen Him.” So you can know God’s will for you. You can see what He will do for you when you know the Jesus of the Bible and what He did.

To know what the Father’s will, mind and heart toward you and your family are, just look at Jesus in the Gospel stories.