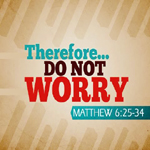 Consider the Lilies of the field

“So why do you worry about clothing? Consider the lilies of the field, how they grow: they neither toil nor spin; and yet I say to you that even Solomon in all his glory was not arrayed like one of these.

You may think that you must work very hard to provide for yourself and get ahead in life. But God wants you to consider the lilies of the field—they do nothing. They toil not, spin not and struggle not. Yet, they grow and are clothed by God while simply resting and basking in the sunshine of God’s love! And when God clothes them, they look even more glorious than King Solomon, the richest king who ever lived.

Like the lilies of the field, God wants you to let Him take care of providing for your material needs, instead of you striving to do it yourself. When you let go and let Him, you will see Him bless you supernaturally, abundantly and generously!

I read this story sometime back in an article. In Melbourne, there was a young man who had been looking for a job. Initially, he received only two calls for interviews after sending out 12 résumés. Refusing to be discouraged, he believed that God wanted to bless him not just with a job, but with a position of influence too.

God was faithful. This young man soon became the business manager of an engineering company even though he had no engineering background. He was offered a very attractive remuneration package and within his first week on the job, was asked to quote on two projects. He knew that this was God’s doing because it was difficult enough just to secure an appointment with contract managers to discuss projects, let alone be asked to quote on not one but two projects. Before long, he was offered the position to run the entire Australian subsidiary with only one other business development manager. He was then only 25 years old!

My friend, God can do for you what He did for this person. Just believe that if God clothes the lilies and grass of the field, which are here today and gone tomorrow, how much more will He clothe you, His eternal and precious child, with beauty and favor! All He asks is that you cease from your striving, allow Him to take over and just flow with Him! Give Jesus the first place in your life always.

When you let go and let God, you will see Him bless you supernaturally, abundantly and generously!