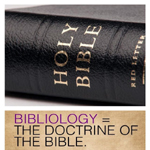 Bibliology (Doctrine of the BIBLE) – 1

DOCTRINE OF THE BIBLE

The word “Bibliology” is derived from two Greek words- biblion which means “book: or “roll” and logos which means “word” or “discourse”. Hence, Bibliology means study of the bible. As introduction there are several topics that are in order for learning such as meaning of the word ‘bible’ and ‘scripture’, Origin of the Bible, and Uniqueness of the Bible.

Uniqueness of the Bible:

The Bible stands to be unique book because of its several supernatural characteristics. It is beyond comparison with any other book in the world. One would be amazed with the startling characteristics. Let us consider them one by one to increase of faith and trust in the Bible and also be convinced that it stands out as the very Word of God. It is true and entirely reliable and powerful and living and transformative and life giving.

Consider the unity of the bible now. It was written by some forty authors over a period of about 1600 years and yet the Bible is one book. It has one doctrinal system, one moral standard, one plan of salvation, one program of the ages. Its several accounts of the same incidents or teachings are not contradictory, but supplementary.

Inspiration has several facets to it: (1) the divine element- God the Holy Spirit superintended the writers, ensuring the accuracy of the writing; (2) the human element- human authors wrote according to their individual styles and personalities; (3) the result of the divine- human authorship is the recording of God’s truth without error; (4) inspiration extends to the selection of words by the writers; (5) inspiration relates to the original manuscripts.

Infallibility means incapable of error or mistake. By the term infallible as applied to the Bible, we mean simply that the Scripture possesses an indefectible authority. It can never fail in its judgments and statements. All that it teaches is of unimpeachable, absolute authority, and cannot be contravened, contradicted or gainsaid. Scripture is unfailing, incapable of proving false, erroneous or mistaken. Though heaven and earth should pass away, its words of truth will stand forever. (John 10:35) and Scripture cannot be broken. (Matthew 5:18).

Christianity believes and teaches that the Bible alone is the revealed Word of God. Even though it was written by men, the ultimate author was God Almighty. This claim was not invented by the Church, but is the claim the Bible makes for itself. One reason that the Bible is different from other books is its unity. Although this book was composed by men, its unity reveals the hand of the Almighty. The mere fact that the Bible claims to be the Word of God does not prove that it is such, for there are other books that make similar claims. The difference is that the Scriptures contain convincing evidence as being the Word of God. The Bible is the only religious Scripture in the world that logically can be considered inerrant in the autographs. The Bible is the only religious Scripture that offers eternal salvation as a free gift entirely by God’s grace and mercy. The Bible is the only major ancient religious Scripture whose complete textual preservation is established as virtually autographic. The Bible contains the greatest moral standards than any book.

The great archaeologist, W. F. Albright, concludes, “The Bible towers in content above all earlier religious literature; and it towers just as impressively over all subsequent literature in the direct simplicity of its message and the catholicity of its appeal to men of all lands and times.”  Thus, The Bible is special. It is unique. No other book has any such credentials. No other book even comes close. Thank God for the bible through which we can attain objective knowledge of God – His nature, His plan of salvation and plan for the universe and eternity. It is through the bible that God speaks to us and extending invitation to come to him with humility and in faith to receive the eternal salvation which He prepared though His Son-Jesus Christ. Amen.