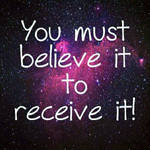 Believe first in Jesus and you will receive your miracle 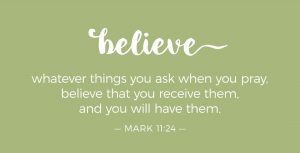 …as you have believed, so let it be done for you…

You may have heard some people say, “How can I believe it when I don’t see it? If I can only see it or feel it, I may just believe that something is happening!”

The woman with the issue of blood who came to Jesus could have felt the same way. For 12 long years, she had gone from one doctor to another, trying every conceivable cure they could offer. She not only grew worse, but ended up losing all her money to those doctors and their “cures”.

Then, something happened to her when “she heard about Jesus”. (Mark 5:27) She started believing that He could and would heal her to the extent that she said, “If only I may touch His clothes, I shall be made well.” (Mark 5:28) Acting on her belief, she made her way to Jesus and touched His garment. Immediately, her bleeding stopped and she felt in her body that she was healed of that affliction. Jesus, her true physician, also pronounced her healed.

Beloved, God wants you to know that when you believe Him, you will see your miracle. What you believe Him for, you will receive.Once in a city in India, a church member lost her wallet at a swimming pool, she prayed together with her husband, declaring their belief that God would restore the loss. One day later, not at the swimming pool but at her feet in the car, she found her wallet! She simply believed that God would restore her loss and she saw the restoration.

In another case, a lady who had skin cancer wore long sleeves all the time to conceal her condition from others. During one of the church camps, she went forward for prayer, believing God for her healing. After one of the pastors prayed for her, she went back to her room, rolled up her sleeves and saw that all the cancerous scarring on her arms had disappeared! Her doctor later confirmed that she had been cured of skin cancer. She believed God for healing and saw it.