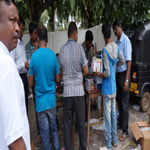 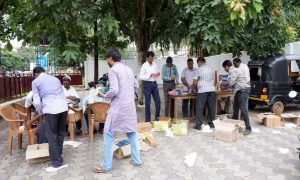 As the Nation celebrated her 70th Independence day, we as a Church decided to distribute tracts and Bibles across the streets near the Church premises. The Bible makes it crystal clear in Romans 10: “Everyone who calls upon the name of the Lord shall be saved.” But, it then says, “how can they call on the one they have not believed in? And how can they believe in the one of whom they have not heard?” That is the need of the hour. Today, many do not know the true Savior and are running here and there for the truth. The answer is in Jesus Christ. Many tracts and New Testaments were distributed to passersby. Rev. Ayub Chhinchani was present to oversee the entire literature distribution process.

Some prominent Church leaders were present too. Many came to volunteer and help in the tracts distribution program. We thank God for giving us this marvelous privilege of sharing the Good news of Jesus to people who do not know Him. Let us uphold in Prayers those people who have received the tracts and New Testaments that morning that they will study and give their hearts to Jesus. Let us Pray for our State and Nation too because it only faith in Christ Jesus that can change us as a Nation. We would like to thank those brothers and sisters who came forward to share the Gospel on 15th August, 2016.