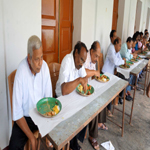 Like the previous years, a half-day Retreat was held for the Elderly on the 10th of October, 2016. The International Year of the elderly is on 1st October and we used to celebrate on the 2nd of October since the last few years, but this year, we had to observe it on 10th October, because 2nd October was a Sunday. This year’s speaker was Rev. Susanta Patra from Kolkata. He gave an encouraging message to those present in the Retreat. He spoke on “How to grow old gracefully?”

We had nearly 200 elders who came to this half-day Retreat on the 10th. The elders were presented with flowers as they entered the Church. After the preaching was over, Holy Communion was served to them and then after a group photo session, a simple lunch was provided to them. It was truly a lovely time when we honored our elders as there were many who couldn’t come to Church regularly due to their old age. We specially thank all our Prayer Co-ordinators from various Prayer zones who helped in making it possible. We also thank the Church Board for conducting such a noble program for the elderly.