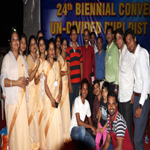 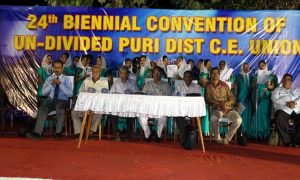 We had been Praying for this Convention since months together and finally the day came. The 24th Biennial Convention of the Un-divided Puri district C.E. Union started on 17th September evening around 6:30 pm with a word of Prayer by our Associate Pastor, Rev. Ayub Chhinchani. The Registration process started around 3 pm in the afternoon of 17th Sep. More than 300 delegates came from Khurda, Jatni, Pipli, Banmalipur, Bailpada, Cuttack and many were from Bhubaneswar too. The 3-day Convention was officially declared as open by Mr. Jacob Pradhan, MLA, G.Udaygiri.

The Opening Ceremony was conducted by Mr. Sagar Das. A word of inspiration was also given by our Church Secretary, Mr. Paresh Das. Pastors from various Churches and prominent members of the District C.E. Union were present on the dias. All the guests were welcomed and felicitated and the local C.E. Choir of our Church presented special numbers. The theme of the 3-day Convention was “Serving God Acceptably”, taken from Hebrews 12:28 (b). On the opening night, after the inaugural ceremony was over, the thematic message was given by Rev. Jacob Mathew, Pastor of the Assembly of God Church, Kolkata. He was the Resource person for the 1st 2 nights. It was a challenging message for everyone present. The message was practical and apt for encouraging the younger generation to be on fire for JESUS. After this, there was fellowship Dinner and then there was the Executive Committee meeting of the District C.E. Union. Thus, the Opening night ended with a sign of greater things to come on the next two days.

The 2nd day of the CE Convention started with Prayer and then Praise and Worship. Then after breakfast, our Associate Pastor, Rev. B.N. Satpathy took the morning devotion which set the tone for the day.

Then there was Flag hoisting done by the Local CE and other CE Unions present. It was followed by a Bible study session by the Resource person for the Convention, Rev. Jacob Mathew. Rev. Mathew once again was creative in sharing the Gospel and carried the Bible study with great passion. His message was translated by Rev. Sangram Singh, who was the other Resource person for the CE Convention this year. It was basically an interactive session by Rev. Mathew where the audience were involved and enjoyed the session thoroughly. The second day of the Convention was marked by many activities. 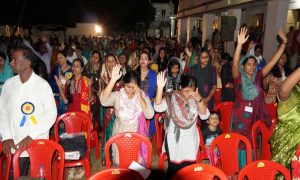 The first of such activity was Bible quiz and memory verse for the junior and senior levels. Then there was a talent show where delegates from various CE Unions performed to the best of their ability. There were thought-provoking skits during this time. It was highly appreciated by one and all. As evening approached after the tea and refreshments, the local CE Choir presented special numbers. It was a time of lively Praise and Worship by the Choir. Then came the time for the evening Revival message, which was preached by Rev. Jacob Mathew and it was translated by Rev. Sangram Singh. He spoke from Luke chapter 5 about the life of Peter, who became a disciple of Jesus Christ. At the end of the message, he gave the altar call. It was a time of retrospection for everyone present. After the fellowship dinner, the 2nd day came to a close.

19th September was the Closing day of the Convention. The day started with Prayer and Worship. It was followed by a message by Rev. Ayub Chhinchani. Then after the breakfast, there was the Bible study. This session was taken by Rev. Sangram Singh of Cuttack. On the last day of this Convention, there was a song competition (group wise). 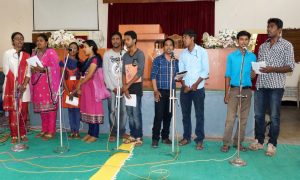 Delegates from various places who had gathered here in our Church took part in it. It was a lovely time listening to some beautiful numbers by the participants. At the end of this song competition, was lunch break. After that, in the afternoon session, there was time for some testimony and then there was the General Body Meeting of the District C.E. Union, where new office bearers were appointed. The new office bearers from our Church for the Un-divided Puri District C.E. Union were as such:

c). Ranjan Kumar Nayak – Auditor. (We Praise God for this brothers who have been appointed to take on the mantle of the District C.E. Union).

After this General Body Meeting was over, the Pastors conducted a Bible game, which was highly appreciated by one and all. As the last evening started, the local C.E. Choir led the Praise and Worship and there were some inspirational numbers presented by them. God’s word was shared by Rev. Sangram Singh. In the Closing Ceremony, prizes were distributed by respected C.E. guests to the deserving candidates who had put their heart and soul in their scintillating performances. The local C.E. Union of our Church won 2nd prizes in three categories. They are:

The Convention ended with Prayer and then there was a love feast on the final night. We Praise God that only by His Grace, this Convention could be carried through. We also thank all the members of the local C.E. Union for working tirelessly in conducting this 3-day Convention. 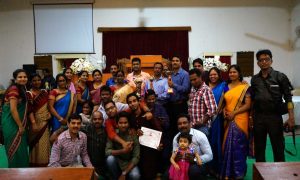 Our local C.E. Union with their trophies